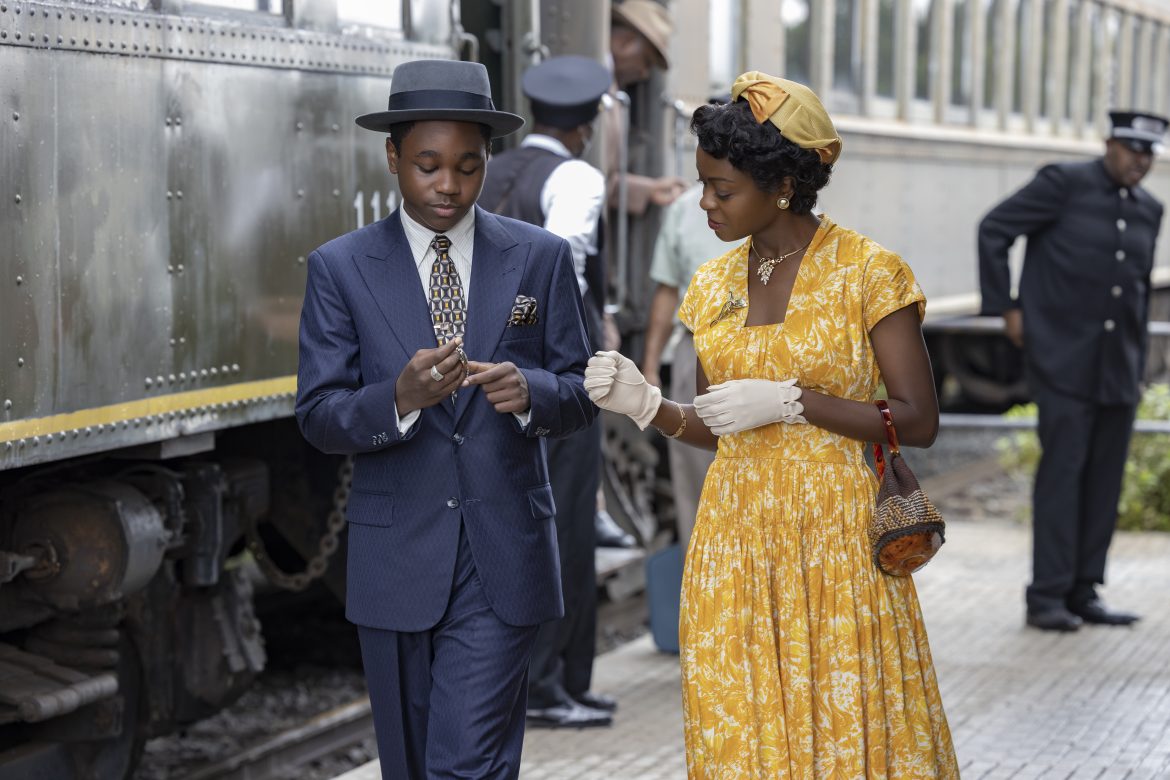 The story of 14-year-old Emmett Till’s horrible death has plagued America for nearly seventy years, and I suspect it will always haunt us. As it should. It is often credited with launching the massive civil rights’ movement in the South, but rarely mentioned in the context of Till’s mother, Mamie Till-Mobley, played by the incomparable Danielle Deadwyler. Mamie lived almost 50 more years than her son (2003) and was active in the Civil Rights movement for decades after Emmett’s murder. This part of the story is less known than Emmett’s gruesome murder.

Mamie, who has been married twice is doing well for herself, with a respectable job in an office in Chicago, getting by as a single mother, enjoying her close relationship with her exuberant son, whose nickname is “Bo-Bo” (Jaylyn Hall). Aware of the prejudice and the racist culture still present in Mississippi, Mamie has no desire to ever go back, but reluctantly allows Emmett to visit his cousins in the summer of 1955. Worried about him from the moment he gets on the train, Mamie’s fears prove to be prescient. When Emmett innocently compliments and then whistles at Carolyn Bryant, a storekeeper’s wife, she not only chases him away with a gun, but tells her racist, murderous husband. The rest is unfortunate history.

Knowing the story behind Till will make many people not see the film, for fear it will be too difficult to watch. Admittedly I briefly felt this way, but director Chinoyne Chukwu, vowed to not show white on black violence nor glamorize trauma and she hasn’t. Frankly it’s more terrifying when the murder is left to the imagination. From the beginning Mamie is pressured to use Emmet’s murder as a political lighting rod! She is too grief ridden to even think of such a thing, at first. But Mamie comes around and she starts by insisting Emmet’s casket be open so the world can see what hatred looks like. Deformed and decomposed, Emmett doesn’t resemble a human at all. It’s truly a harrowing image and it was seen all over the world.

When the two men who are accused with killing Emmett are brought to trial and Mamie takes the witness stand, Deadwyler is fantastic. Deadwyler is great throughout, giving both a harrowing and restrained performance. We never see her thinking, she is always in the moment, no matter how difficult the scene is. And some of these scenes are just as difficult to watch as they are to act. A mother’s grief is an agonizing thing, and the filmmakers do not stray away from this. Despite this, the film never drifts into melodrama and is very well paced.

The filmmakers chose to focus on a short time period in Mamie’s life and it is certainly uplifting to see that the death of Emmett Till galvanized her and others into their intense dedication to the civil rights movement, but the film ends shortly after the trial; whose verdict, most of us already know. It has one of the those end credits that tells you all the great things certain characters accomplish in the future. But what kind of movie would it have been if it most of the film was focused on Mamie’s life after Emmett’s death, for she lived a very long time. That story is less familiar to us than the disturbing, so sad story of Emmett.

Still the film is very good, and it is an important film. The narration is focused, and we rarely see shots of the killers, never giving them too much screen time or weight. The power of film is its ability to move, entertain and inform us, and this film accomplishes all of this. And what if we have seen the story before or know the story well, it’s an important scar in American History and it needs to be told over and over again.

At the center is a harrowing performance that never asks for pity, is always believable, and strikes an impressive balance between vulnerability and steely strength. I am keeping my fingers crossed that Deadwyler is nominated for an Oscar.