Boost Your Reach Through Google Ads 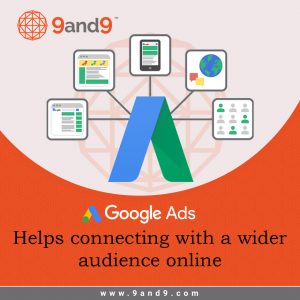 Google Ads was launched just two years after what has become the most popular website in the world: Google.com. The advertising platform came on the scene in October 2000 as Google Adwords, but after some rebranding in 2018, it was renamed Google Ads.

Google Ads is a paid advertising platform that falls under a marketing channel known as pay-per-click, where you (the advertiser) pays per click (PPC) or per impression (CPM) on an ad. The better your ad campaign, the more clicks you generate, and the greater your probability of obtaining a new lead or customer.

Why advertise on Google?

Google is the most used search engine, receiving 3.5 billion search queries a day. Not to mention, the Google Ads platform has been around for nearly two decades, giving it some seniority in the area of paid advertising. Google is a resource used by people around the world to ask questions that are answered with a combination of paid advertisements and organic results. And, according to Google, advertisers make $8 for every $1 they spend on Google Ads. So, there are a few reasons why you’d want to consider advertising on Google.

Also, the competitors are using Google Ads. Thousands of companies use Google Ads to promote their digital marketing businesses, which means that even if you’re ranking organically for a search term, your results are being pushed down the page, beneath your competitors.

What is Ad Rank?

Ad Rank is a metric that Google uses to determine the order in which paid search ads are displayed on the SERP. Per Google Ads Help:

The bid amount is just one of five factors that go into calculating Ad Rank. Other factors include:

– The Ad Rank thresholds, a set of quality thresholds your ad needs to meet in order to be eligible to show. These can depend on things like the topic and nature of a search, location, and device type

– Search context, including the query, the time of the search, the other ads and search results that show on the page, and other user signals like location and device type

– Ad extensions and other ad formats: these are the pieces of additional information that can be added such as a phone number, or more links to other pages on your website.

– The Bing Network: Formerly known as the Yahoo Bing Network, the Bing Network is the ad network belonging to Bing, Google’s biggest search engine rival. A number of syndicated partners make up the Network, including AOL, the Wall Street Journal, and Gumtree.

– According to statistics from Bing Ads, the Bing Network currently has a 33.9% market share in the US, and 24.7% in the UK, meaning that it reaches a not-insignificant portion of searchers who may not be reachable via Google Ads.

– Search Engine Optimisation (SEO): This term refers to all the methods, tactics, and processes by which you can increase the likelihood of your website appearing and ranking well in the organic (non-paid) search engine results. If you employ cracking SEO, then you may not even need to use paid search. However, many marketers will recommend that both are vital to search marketing and complement each other effectively.

Ella Smith has been a brilliant writer and her writing is impressive. She often writes for Educational and motivational topics that is a great point in her. She has started writing for Brightshub for a couple of months.
View all posts

Why Accounting Assignment Help In Sydney Is The Best

Why Blogging is Still Relevant to Your Digital Marketing