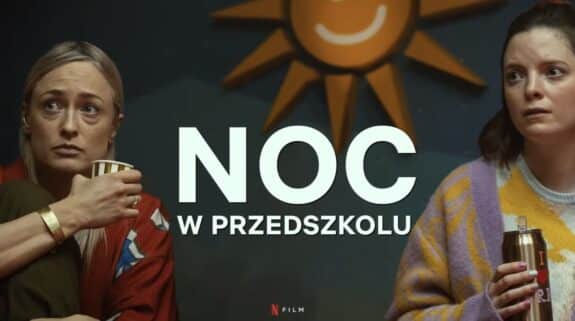 A Night at the Kindergarten is theatrical in its setting, and manages at times to step outside the scene showcasing situations that go beyond its genre (comedy, more or less bitter and dark). The movie manages to a certain extent to hit the mark, with the development of the characters and the story.

Piotr Witkowski is back, but this time around in a comedy. We saw him recently in the the action thriller ‘Lesson Plan‘. On this occasion he takes on the role as a less “heroic” character (heroic – in the antihero way – nonetheless) in this comedy that instead of taking place in a high school, takes place, as the title indicates, in a kindergarten. Eryk (Piotr Witkowski) still has a remarkable moral compass, and will not tolerate any kind of injustice, and I mean absolutely zero slights. True to his character he declares, “We have to fight it”, referring to the injustice that is central to the premise.

The film counts on an otherwise good cast, each playing their parts convincingly, a group of parents each with their agenda and fixations. Worry not for Eryk is there to put everyone in their due place!

The script is well and calculatedly worked, forever leading back to the center of this little universe, Eryk. There are comedic scenes, some parody, and farce. We even get to see Eryk perform a rap number.

It just about makes the mark (I will reiterate – just about) within its limited aspirations. A film that focuses more on the characters – or character – than on the artistic. As far as visuals and photography go it does not stand out, but passes.

If you enjoyed ‘Lesson Plan’, or are a Witkowski fan, this is a number for you, rest assured.